(2009) Study may prompt rethink on schizophrenia drugs Schizophrenia patients given a cheap older drug are less likely to die prematurely than people on newer treatments, despite the older product’s well-known adverse side effects, Finnish researchers said on Monday. Source: Reuters (The Lancet) (PDF)

There are strong indications for the existence of eugenic motives with antipsychotics.

Pharmaceutical companies have been found to deliberately keep deadly side effects a secret, regularly paying large damages and fines that, while sometimes multibillion-dollar in size, are a mere pat on the back when considering the profits made by antipsychotics.

Psychiatrists are to blame

A pharmaceutical company does not invent it and acts with a simple mentality: "if you don't do it, someone else will". It is the psychiatrists who determine what is prescribed and a company learns quickly enough what it has to make to sell.

After the disclosure of the concealment of deadly side effects and marketing for improper use of the antipsychotic drug Risperdal by the Belgian pharmaceutical company Janssen-Cilag, a subsidiary of Johnson & Johnson, the CEO responded with the following in which he shifts the blame to psychiatrists.

“If that reflects the reality, I can't imagine that the FDA has not taken action against it in recent years,” said Christian De La Porte, medical director at Janssen Pharmaceutica.

He also refers to the psychiatrists who prescribe the product for the responsibility for off-label use. “It's not a medication you can get off that is prescribed. We have no control over whether they prescribe the medication within or outside the approved indications. It seems impossible to me that suddenly all psychiatrists are so influenced by marketing that they all start prescribing in an uncontrolled way to patients who could die from it. If that is the case, there is also a major ethical problem with the psychiatrists.” 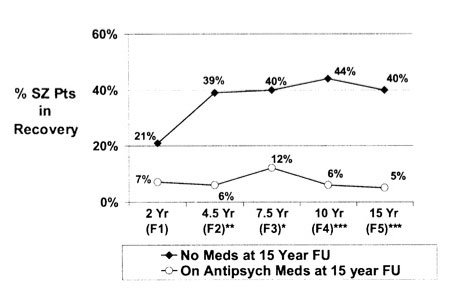 Long-term outcomes of schizophrenia, source: Martin Harrow and Thomas Jobe. “Factors involved in Outcome and Recovery in Schizophrenia Patients Not on Antipsychotic Medications: A 15-year Multifollow-up Study. The Journal of Nervous and Mental Disease, 195 (2007):406-414.

Alternative treatment initiatives have been systematically suppressed. One example is the story of American professor Loren Mosher, director of schizophrenia research at the National Institute of Mental Health (NIMH) in America from 1968 to 1980, one of the highest-ranking positions in psychiatry at the time.

The professor invented an effective and more humane treatment method for treating the most serious psychological problems that he called Soteria psychotherapy. With money from the NIMH, Mosher had opened his first Soteria home in Santa Clara, California in 1971.

The treatment, although a first experiment, offered 90% of the patients a chance of a good recovery without the use of antipsychotic medication.

In the Soteria home, schizophrenia patients lived drug-free with young non-professional nurses trained to listen to and understand people, to offer them friendship and companionship. The professor tested his idea that “schizophrenia can in many cases be cured with the help of meaningful relationships rather than drugs, and that such treatment ultimately leads to undeniably healthier lives.”

The Soteria house experiment worked better than the professor expected. In the initial six weeks, patients recovered just as quickly as patients treated with drugs in hospitals.

The success of Prof. Dr. Loren Mosher with his non-professional caregivers and without drugs put the established psychiatry to shame.

The National Institute of Mental Health cut funding for the Soteria home and forced it to close. In 1998, the professor was so disgusted by established psychiatry that he wrote a letter of resignation to the American Psychiatric Association.

Today there is Open Dialogue psychotherapy that can offer most schizophrenia patients a good chance of recovery without the use of antipsychotic drugs.

(2022) De-Psychiatrization and the Promise of Open Dialogue Developed in Finland, Open Dialogue (OD) is a multi-professional, continuous, needs- and outpatient-oriented model of psychiatric support for a crisis. Its methodology represents a shift from the psychiatric paradigm to a focus on meaning-making, common language, and including a network of different voices in the process of treatment. Source: Mad in America

German psychiatry began the organized murder of psychiatric patients through starvation diets 20 years before the Nazi party was founded and continued until 1949 (see case file Holocaust). In America, psychiatry started mass sterilization programs and similar programs have taken place in several European countries. The Holocaust began with the murder of more than 300,000 psychiatric patients. The suspicious side effects and facts surrounding antipsychotic treatment show strong evidence for the presence of eugenic motives.

The saying is, you have to learn from the past.

An article by well known philosopher Bonnie Burstow, an anti-psychiatry scholar (someone involved in criticism on psychiatry), shows a more current perspective on eugenics in psychiatry.

(2019) “Psychiatric Eugenics Then and Now — You Betcha It’s Still Happening!” “Those who cannot remember the past are condemned to repeat it.” (George Santayana) Source: Mad In America